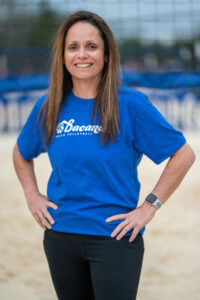 Coach Latacha has over twenty-five years of volleyball coaching and playing experience. Originally from Utah, Coach Latacha was a three-sport athlete playing volleyball, basketball and softball. She earned All-Conference and All-State team selections in all three sports and was recruited to play D1 basketball/softball. Volleyball quickly became her passion which she has turned into a successful coaching career.

Coach Latacha founded Bacana Beach volleyball with the vision and passion of giving her athletes equal opportunities to take their beach game to the next level, while coaching and mentoring growth, leadership and development on and off the court.

In addition to leading her Bacana Beach Club, Latacha serves as the 14 Black Head Coach at Triangle Volleyball Club and as the Head Varsity Coach at Durham Academy High School. She is also an involved coach for with p1440, an elite junior beach program directed by Kerri Walsh and Rob Long.

Coach Latacha is a mother of five children – Miranda, Nicole, Junior, Josh and Jacob. “Being a mother of five of my own athletes, I recognize and appreciate that EACH athlete is motivated, driven, and touched in different ways and I thrive in finding how to motivate each athlete.”